Django is a Python web framework that can be used to build web applications. In this tutorial, you will learn how to build complete Django project, ready for production use. In case you haven't installed Django yet, you will learn how to do it in the first part of this tutorial. This tutorial covers how to create a simple blog application using Django. The purpose of this tutorial is to get a general idea of how the framework works, understand how the different components interact with each other, and provide you with the skills to easily create Django project with a basic functionality.

This tutorial will cover the following topics:

If you have already installed Django, you can skip this section and jump directly to the Create a Django project section. Django comes as a Python package and thus can be installed in any Python environment. If you haven't installed Django yet, the following is a quick guide to install Django for local development.

Note: Django 3.0 requires Python version 3.4 or higher. In this tutorial, we will use Python 3.7.3. If you're using Linux or MacOS X, you probably have Python installed. If you are using Windows, you can download a Python installer here .

If you are not sure whether Python is installed on your computer, open the Terminal app and type python

If you see something like the following, then Python is installed on your computer:

if Python is not installed on your computer, then install it as follow:

Open the Terminal app and run the following commands:

Whenever you are starting a new web development project, it’s a good idea to create an isolated Python environments. so that you can use different package versions for different projects. Another advantage of using virtualenv is that you won't need any administration privileges to install Python packages. Run the following command in your shell to install virtualenv:

After you install virtualenv, create an isolated environment with the following command:

This will create a venv/ directory, including your Python environment. Any Python libraries you install while your virtual environment is active will go into the venv/lib/python3.7/site-packages directory.

Run the following commands to activate your virtual environment:

The shell prompt will include the name of the active virtual environment enclosed in parentheses, as follows:

You can deactivate your environment at any time with the deactivate command.

You can find more information about virtualenv here .

On top of virtualenv, you can use virtualenvwrapper. This tool provides wrappers that make it easier to create and manage your virtual environments. You can find more information about virtualenvwrapper here .

Django will be installed in the Python site-packages/ directory of your virtual environment.

Now, check whether Django has been successfully installed. Run python on a terminal, import Django, and check its version, as follows:

If you get the preceding output, Django has been successfully installed on your machine and you can now dive into creating the application.

Our first Django project will be building a complete blog. Django provides a command that allows you to create an initial project file structure. Run the following command from your shell:

This will create a Django project with the name mysite. If you cd into this new directory you’ll see another directory called mysite and a file called manage.py.

Let's take a look at the project structure generated:

These files are as follows:

The generated settings.py file contains the project settings, including a basic configuration to use an SQLite 3 database and a list named INSTALLED_APPS, which contains common Django applications that are added to your project by default.

To complete the project setup, you'll need to create the tables in the database required by the applications listed in INSTALLED_APPS. Run the following command:

You’ll see the following output on the command line:

The preceding lines are the database migrations that are applied by Django. By applying migrations, the tables for the initial applications are created in the database.

Django comes with a lightweight web server to run your code quickly, without needing to spend time configuring a production server. When you run the Django development server, it keeps checking for changes in your code.

You’ll see the following output on the command line:

Now that the server is running, visit http://127.0.0.1:8000/ with your Web browser. You’ll see a “Congratulations!” page as shown in the following screenshot. 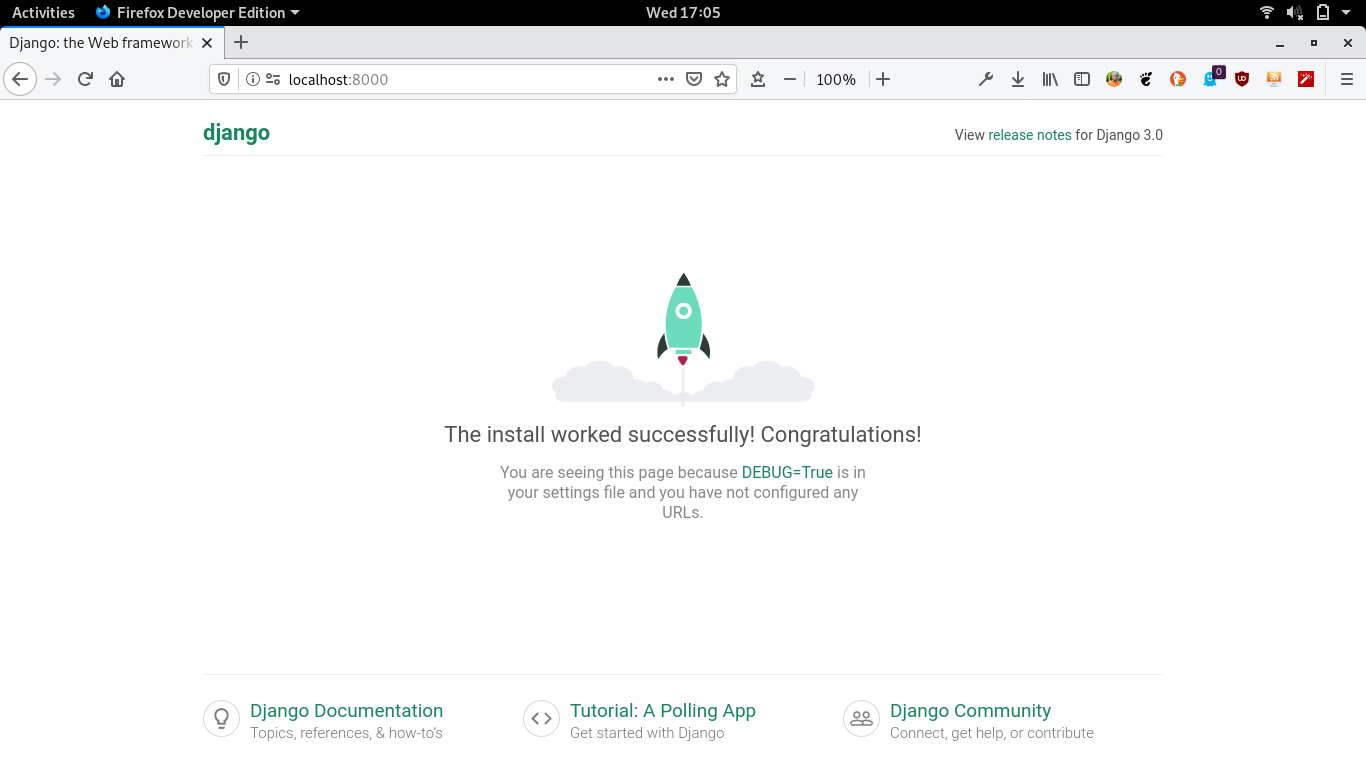 That's it for now. The next tutorial is to create Django models so that we can setup a database to our Django-powered blog application.

Buy me a coffee

My name is Joseph Oseh Frank, I'm a CNC (Computerized Numeric Control) programmer based in Italy. I'm Python/Django passionate, I started to learn Python programming by reading books, doing online stuff etc. I developed this blog to share some of my thoughts and experience about Python/Django programming. Read more